Generalist sales people can no-longer go into combat against ‘specialists’ without getting KO’d. 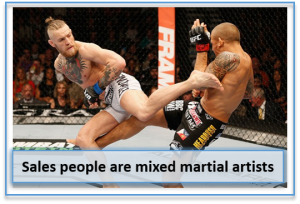 Mixed Martial Arts (MMA) is one of the fastest growing sports in the world today, and as the name suggests the rules of this relatively new sport combines the disciplines of:

In essence, MMA’s surging popularity is in part due to the fact that fighters face the huge challenge of becoming proficient in a diverse range of additional skills and competencies that are nearly always outside of their core capability. That is, MMA fighters usually take up the sport from a boxing or wrestling or kick boxing or karate background and they are then forced to quickly learn to become effective across 9 other disciplines and skill-sets that often take them well outside of their comfort zone.

MMA competitors cannot survive for long by being effective at just one discipline….and most successful fighters (such as Connor McGregor pictured above) have a well-rounded set of skills across all 10 disciplines meaning they can quickly adapt, and execute the right skills, at the right time, depending on the opponent.

What does MMA have to do with sales?

When you think about the traditional role of the B2B sales person, there are many similarities with MMA fighters. Sales people have always been expected to be highly skilled across a diverse range of competencies, and in my experience sales people often possess one or maybe two core strengths that they build their career around. Some sales folks are great presenters. Some are great prospectors, whilst others are excellent at relationship building and networking. Some are hunters, and others are farmers. Some are great collaborators with high levels of EQ, whilst others are analytical types with high IQ. But here’s the thing, very few sales people that I have worked with over 28 years can claim to be even close to competent across ALL skills that were previously required in B2B sales roles.

When you think about the traditional sales role, where a sales person would effectively ‘own’ a territory and was responsible for the execution of all activities within that territory, it’s little wonder that so many sales people have struggled. This old approach meant that each sales person had to execute a broad set of skills (sales and marketing) to be effective in their territory. When you break it down, sales people have traditionally had to be effective across the following areas:

Of course, to be successful in this traditional sales role meant that all of these above-mentioned competencies (along with some others) had to be underpinned by a high degree of business acumen and in some cases some street smarts. Regardless of the extent to which you agree or disagree with the above list of competencies, my point here is simply that sales people, like MMA fighters, have previously had to be proficient in far TOO MANY skills in order to compete, but this is no longer the case!

Sales people no longer have to possess such a broad set of ‘general’ skills:

As you may have read in my previous posts, we have now moved from vendor-push to customer-pull business models. Buyers are now in control and they continue to tell us that they want SPECIALIST sales people to engage with – not ‘generalists’. Rightly or wrongly, today’s buyers now expect much more than a jack of all trades when it comes to dealing with a sales person. As buyers become more knowledgeable and demanding they increasing go into ‘sales-person avoidance mode’ (thanks Tim Hughes) if they think that they are dealing with a ‘generalist’ and that’s now irrefutable.

So, unlike MMA fighters, sales people now need to stop trying to be good at a diverse range of skills and start to work out where they can specialise to add maximum customer value. Like it or not, sales people will all be forced to pick some logical areas in which to specialize and this will most logically stem from their core strength or area of expertise, knowledge or academic achievements (more on that another time).

To continue the analogy, there are very few MMA fighters whom could compete effectively if they made the decision to go back to a single discipline sport such as Boxing, although Connor McGregor (MMA fighter) is stirring up some headlines now about a potential block-buster fight with Floyd Mayweather (Boxing Champion). As much as I respect and admire Mr McGregor, with his exceptional cross section of MMA skills, he will in all likelihood be grossly ineffective against the highly specialists skill sets of Mr Mayweather if he is forced to restrict his game plan to just his boxing skills. That said, Mr McGregor does have a habit of proving people wrong.

Whether you’re a fight fan (like me) or not, the point here is simply that generalist sales people can no-longer go into combat against ‘specialists’ without being knocked out. So, if you if you think that you have ‘mixed’ sales skills, try to remember that your customers don’t value those mixed skills the way that you might. However, they do value your specialist skills – your unique promise of value.

If you want to know how to go about specializing then you can pre-order my new book (The Future of the Sales Profession) by emailing me at graham@transformsales.com