Structured ‘on-boarding’ for sales people will provide your business with massive ROI. 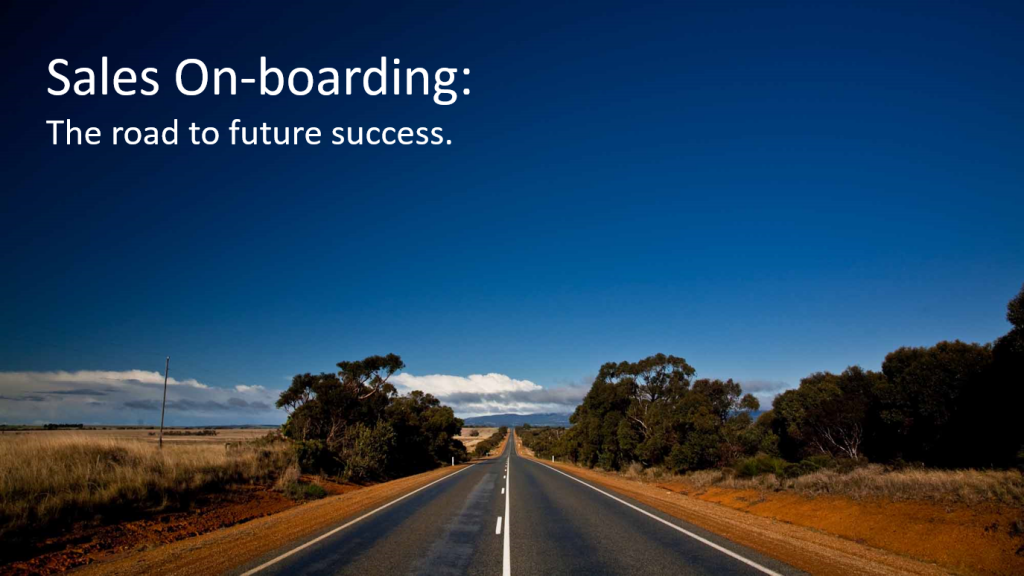 One of the very first lessons that sales people learn is the importance of making a good first impression, and yet it’s clear that far too many business leaders that pay scant regard to this important maxim when it comes to bringing new sales people into the organisation. The process of identifying and hiring new talent into the sales department has always been important, and as we move into increasingly turbulent times, sales ‘on-boarding’ and managing ‘attrition’ will become critically important for businesses…regardless of industry.

Due to the nature of the sales role there has always been high staff turnover (attrition) rates with studies now showing that “the average B2B sales team loses 27% of its members per year – whether they quit or are fired” (Alec Ross). I actually believe that 27% is on the low side across most technology sectors, and in my experience poor on-boarding is the main cause of this massive attrition cost.

When you consider the vast amounts of time, money and company resource that is invested in searching for, identifying and interviewing (sometimes as many as 6-8 interviews) sales candidates, you have to question why so many businesses think that the job is completed once the new hire commences work on Day One. I am continually amazed by the business leaders that believe that they can hire a new sales person, point them towards their territory, and then send them off like a coin operated robot. If you are not prepared to provide the new recruit with the proper induction, training and detailed preparation, along with the on-going support structures, and then how can you possibly expect acceptable performance output? Slap dash on-boarding not only sets the new hire up for failure but it also erodes the most important thing that any sales based business has – its CULTURE. That is, expecting a new hire to buy–in to the organization’s vision, purpose, needs, values, and structural policies is a fool’s errand if all of that is not clearly communicated and reinforced during the on-boarding process. Arguably the most important component for creating high performance sales cultures is clarity of objectives, which MUST start in the on-boarding process and MUST be continually reinforced.

Looking back at almost every sales job that I have undertaken, they nearly always commenced with the following scenario: “here is your patch, there is the phone, – start selling”. Seriously, I have lost track of how many times I have been told during an interview that “we need someone that can hit the ground running”. Sales people rarely recover from a poor on-boarding experience and the slow ramp up (and poor results) that inevitably follows. This is usually because someone in Senior Management will erroneously pigeon hole the floundering new hire as a “C” or “D-grader”, which invariably leads to occupational stress for the sales person, and a rapid decline in commitment to the organisation – thus creating a ‘vicious circle’ of staff attrition that is totally preventable.

Yes, there are other reasons for the traditionally high staff attrition levels in sales, not least of which is the high levels of performance scrutiny and exposure for under performance, but businesses must to take a lesson from sporting teams when it comes to ‘preparing for the contest’. Imagine a sporting team that selects a new player from a feeder competition and then puts the newby straight into the senior team without any pre-season training, skills assessment or time to get to know his/her team mates and game plan. It would simply never happen, because sporting clubs know that this scenario would undoubtedly destroy team performance, and more importantly, it also does irreparable damage (in many cases) to the confidence of the new player that was sent into a sporting battle totally unprepared. I’m acutely familiar with this scenario because it has happened to me.

So what is different now? The context has changed.

In the old days of ‘emerging and early growth markets’ where products were literally flying off the shelves this type of scant regard of the on-boarding and training of new sales people was acceptable mostly because the competence of the sales person didn’t matter that much when demand is high and competition was low. Those days are long past as we now enter mature markets. If you are still providing the traditional One Week’s induction training, followed by some half-baked internal meetings with key stakeholders, watching a few corporate video’s, combined with a few ride-along meetings with colleagues then it’s time to review your on-boarding process. Having some sort of structured on-boarding program is now key. According to a recent study by the Wynhurst Group, when employees go through structured on-boarding, they are 58% more likely to remain with the organization after three years.

Extending probationary periods from 90 days to 180 days is now common and further proof that businesses apparently don’t understand that it’s a two-way street – that is, do a rubbish job of on-boarding and the new sales person will walk. According to BambooHR (2014), 1 in 6 people quit or considered quitting a new job due to ineffective on-boarding.

So, I urge you to approach your new-hire program with care, taking time to consider all the little things that a new sales person will need to succeed at their job in today’s competitive context. Take a steer from the sporting industry and think long and hard about how you bring new sales people into your team, and how you prepare them for an increasingly tough contest in the VUCA business world. Without a structured on-boarding process, chances are that new hires will not make it past the first few critical months, and this scenario is increasingly unacceptable in the new world order.